A contemporary fairy tale with a dirty, sexy twist!

No Inhibitions, an all-new sexy and seductive standalone from New York Times bestselling author Erika Wilde is out now! 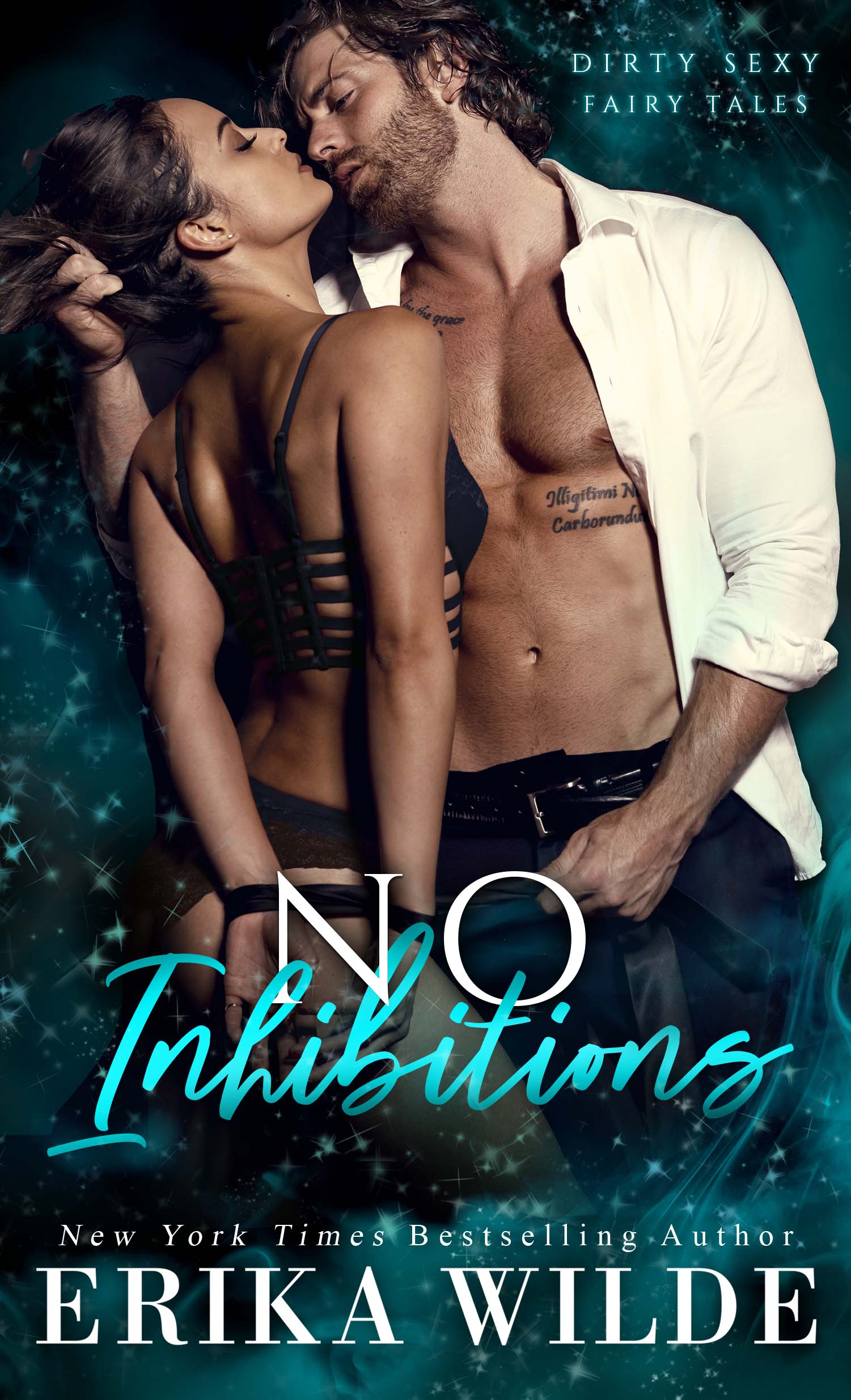 He’s a cautious and guarded professional, but she’s a temptress he can’t resist, and the customers won’t be the only ones fulfilling fantasies.

But after their business deal is over and their affair comes to an end, will the lady and the reformed tramp throw out all inhibitions to find their happily ever after?

(NO INHIBITIONS is a STAND-ALONE, enemies to lovers fairy tale romance. No cheating. No cliffhangers) 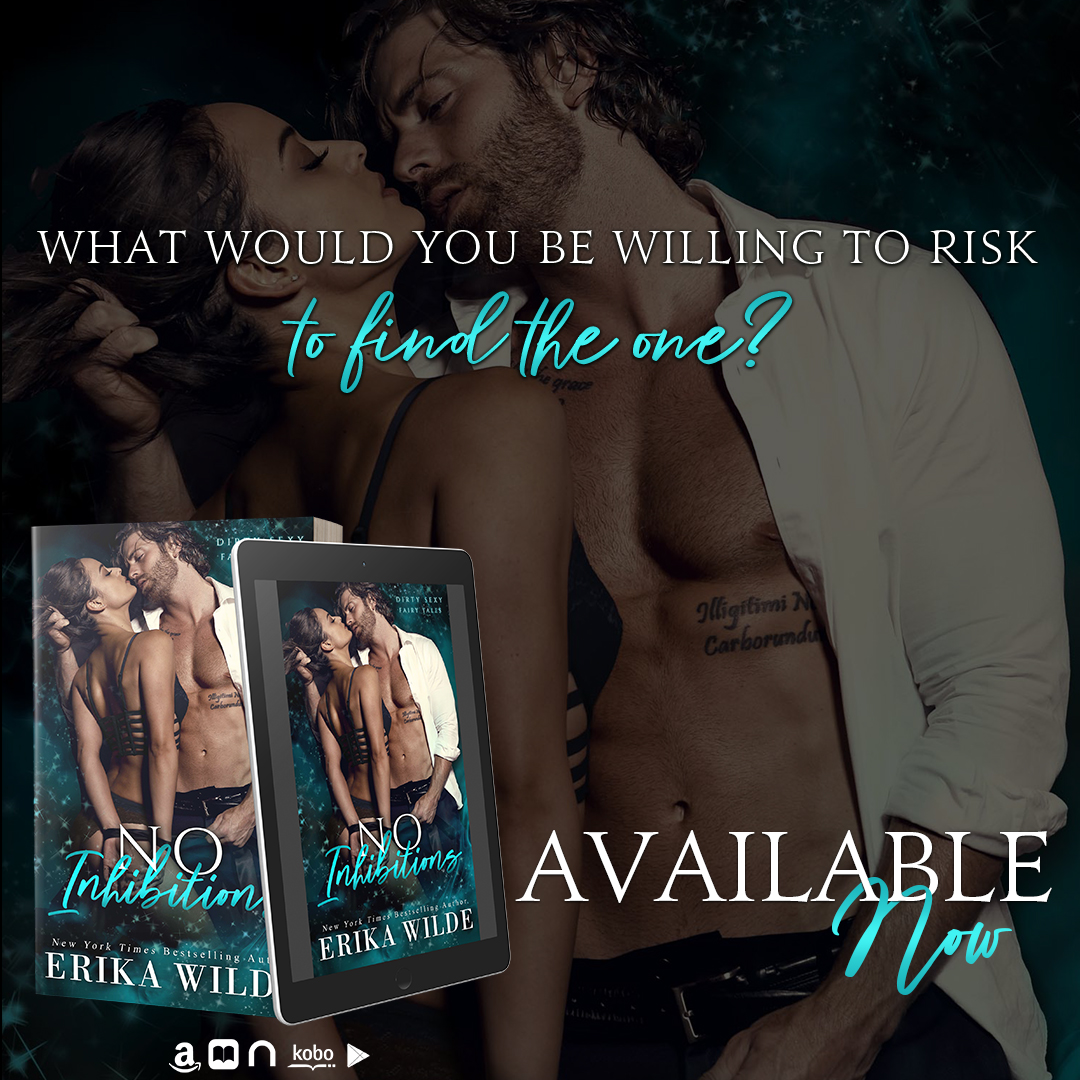 “Hello, Remy,” she said in greeting when she finally reached him.

“Tempest,” he replied with a cordial nod.

She cocked her head playfully to the side, momentarily drawing his gaze to the way she’d swept her dark hair into an intricate style that was held together with crystal and pearl pins.  The elegant updo left her shoulders and slender neck bare, emphasizing the pair of sparkling ruby earrings hanging from her lobes.

“Dare I say you look like you’re about to bolt for the exit,” she said, a light accusation in her tone.
He inhaled a deep breath—big mistake—because the scent of her soft, feminine perfume went straight to his dick.  It took effort to remain outwardly unaffected, and for her, he allowed a smile to ease across his lips. “Guilty as charged.”  He planned on doing exactly that as soon as she went on her way.

Her perfectly shaped brows furrowed in a concerned frown.  “Are you not having a good time?

“Don’t take this personally, but fairy tales are not my thing,” he replied, his tone wry.

“How do you know that for certain?” she countered, a flirtatious glimmer now sparking in her amber eyes.  “If you leave right now, you’ll never know if something magical might happen tonight.”

He huffed out a laugh at her whimsical, romantic notion, though the sound that erupted from his throat was as rough as sandpaper.  “I’m not looking for anything magical to happen.” In fact, he’d do his best to avoid anything even remotely close to it.

She shrugged a smooth, bare shoulder.  “Sometimes, it’s better to leave all expectations and cynicism at the door and just see where the evening takes you.”

He shook his head in disagreement.  “Trust me when I say my cynicism is well earned.”  And now he was determined that all that skepticism would protect what little was left of his soul from being further ransacked.  “I was happy to come and support the Wilder Way Foundation, and now that I’ve done that, I think it’s best if I go. Good night, Tempest.”

He started to walk away, but she grabbed at his tuxedo sleeve.  “Remy, wait.”

Not wanting to be rude, he stopped and glanced back at her.

The smile she gave him was so sweet and persuasive it made something in his chest shift ever so slightly.  “You can’t leave without having at least one dance.”

Oh, yes, he could, and he shored up his resolve against that imploring look of hers. “I don’t dance.”

The hand on his arm slid down, until her cool, slender fingers curled around his, not only startling him but ensnaring him in more ways than one.  “It’s a ballad,” she pointed out of the song Raevynn Walsh was now singing. “Everyone can slow dance. It takes minimal skill . . . unless you don’t trust yourself to stand that close to me?”

Her comment was underscored with a subtle challenge, an undeniable dare that alluded to the attraction between them that was getting increasingly difficult for him to resist.

“Just one dance,” she persisted oh so sweetly, her husky voice taking on a teasing lilt as she leaned in closer.  “I solemnly promise not to cast any kind of fairy-tale spell on you.”

Bold and determined Tempest Wilder didn’t give him another chance to turn her down.  With her hand secured in his, she pulled him toward the dance floor in front of the stage, which was already filled with other couples, and he would have looked like a jackass if he rebuffed her at this point.  Once she found a spot for the two of them, she turned back around and didn’t hesitate to step as close as their bodies would allow.

The provocative feel of her soft breasts pressing against his chest and her supple thighs skimming along his was like a fucking shock to his celibate system, and he automatically tensed in response to the sexy female curves aligning perfectly to his more masculine frame.  It was all he could do to keep his dick from getting hard as a spike against her lower stomach.

Still holding his one hand, she smoothed her other one up the lapel of his jacket and around his neck.  Clearly sensing his discomfort, she tipped her head back and gave him a flirty smile, no doubt meant to tease him.

“So, when it comes to slow dancing, the man usually puts his arm around the woman’s waist,” she suggested, since he hadn’t yet done so.  “And if he really likes the woman he’s with, he’ll splay his hand low on her back and pull her in close.”

Oh, he knew how to slow dance, but just the thought of putting his hands on her so intimately was wreaking havoc with his libido, and he had a feeling she was well aware of his predicament, too.  It was another sexy dare from her, and while he’d spent the past few years avoiding this kind of close contact with Tempest, the sexually starved man in him who desired this woman slipped past all his carefully erected walls.

Fuck it, he decided.  What could happen in a room full of people?  Giving in to the temptation to touch her, to enjoy the feel of her in his arms, even for a few minutes, he placed his hand on her bare back and slowly caressed his palm all the way down to the base of her spine.  The subtle pressure of his hand against her smooth skin drew her as close as the two of them could get, aligning their hips in a way that was suggestively carnal.

Breathing became difficult . . . He hadn’t been this close to a woman in over three years, and there was no denying she felt so damn good.  She was incredibly soft, she smelled like heaven, and she made him want to do something wild and wicked and uncharacteristic—like take her somewhere dark and private where he could give in to the lust clamoring inside him.

An unmistakable shiver coursed through her as they shifted in time to the slow song.  With her staring into his eyes, her own darkened with awareness as she moved her head to the side of his to speak into his ear.  “See, touching me wasn’t so bad, was it?”

“You’re bad,” he murmured, shocking himself with his own playful response when he’d been so indifferent to women for years.  It was as though this woman was rousing his sex drive, along with a more indulgent part of him, from a long, deep slumber. The thought was both frightening and exhilarating.

She drew her head back and laughed.  To his surprise, the light, sensual sound eased the rest of the tension in his body, allowing him to just enjoy the moment with her.

She gave him a cheeky grin.  “Just for the record, Mr. Lowell, I can be very bad, depending on the circumstance.”

Erika Wilde is a New York Times Bestselling author. She is best known for her super sexy Marriage Diaries series and The Players Club series, and has also co-written the Dirty Sexy Series and the Book Boyfriend Series with Carly Phillips, her best friend and writing buddy for the past twenty years. She lives in Oregon with her husband and two daughters, and when she’s not writing you can find her exploring the beautiful Pacific Northwest. For more information on her upcoming releases, please visit her website at www.erikawilde.com and sign up for her mailing list for updates and news!